JOHN’S ‘ULCER’ – NOT ALL MELANOMAS ARE DARK 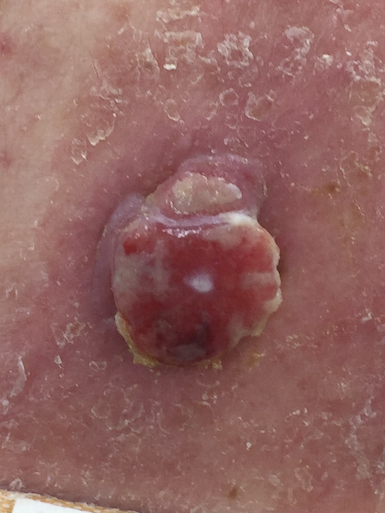 JOHN’S ‘ULCER’ – NOT ALL MELANOMAS ARE DARK

“It is just an ulcer. I accident ripped my skin 8 weeks ago and got infected,” said John in our consulting room, “Can you prescribe me some antibiotics for it?”

John came into the clinic and he thought he would also need a script of antibiotics to treat an infection on his back. About 8 weeks ago, John’s wife noticed some slight redness and inflammation on his back, which is around one of the moles. That mole had always been slightly raised from the skin, but the redness was new. When she mentioned that to John, he remarked that he did rub his back a bit too aggressively against the towel the morning before. Over the next few weeks, the area appeared to have grown in both shape and elevation and adopting a more ulcerated appearance. John began to experience discomfort sensation on the site and started to apply some over-the-counter anti-septic and cortisone creams. However, nothing worked. The lesion continued to grow, change and ulcerate for another month. In John’s mind, he thought he was suffering for an infection where he tore the skin. Fortunately, John’s wife insisted that he came to have the skin checked, though thought he would only a script of antibiotics to fix the infection. But after John showed us the ‘infected site’, almost immediately we were on high alert. Upon closer examination, we told John that we suspected that it was melanoma. A procedure was organised the next day: it turned out to be an advanced melanoma.

Melanomas don’t always have a pigmented, dark-coloured appearance. Some melanoma can disgust like an ulcer. If you are no sure of any changes to your skin, see a doctor having experience with skin cancer. Don’t be fooled by Melanomas.